Mobile video surveillance is forecasted to grow with continuous momentum, triggered by the rising demands for public security and safety. In fact, this technology has been widely adopted by both public and private sectors to protect them from crime. Apparently, the surveillance market has shifted from cable-based CCTV structures to go wireless by adopting network technology. For instance, Tokyo Metro Co. will install IP surveillance cameras in over 3,000 subway vehicles, starting in 2018 or 2019, as an initiative to improve passenger safety for the 2020 Tokyo Olympics and Paralympics. TOEI Transportation, the authority of transportation in Tokyo, has launched plans to install surveillance cameras in the ceiling of each subway vehicle to collect video footage for evidence use.

In order to facilitate all the onboard surveillance cameras in a centralized management, the trains must be equipped with an all-in-one mobile NVR system with the following technological qualities to meet the requirements for the Japanese transportation administration.

The mobile NVR system is built to work in both CCTV and IP protocols, since there are still train carriages deployed with conventional CCTV cameras. Thus, the captured footages by CCTV surveillance devices have to be converted into adaptable formats for IP protocols by the NVR system. In other words, the NVR system must be able to effectively perform IP encoding from analog to digital streaming formats.

Function as In-Vehicle Gateway Computer for PA and PIS Systems

For train automation purpose, the mobile NVR system shall function as an in-vehicle gateway computer to control and manage sub-systems such as PA (Public Address) and PIS (Passenger Information System).

It is an apparent phenomenon that the surveillance world has evolved into IP world. Thus, most new train carriages in the world are deployed with IP video surveillance devices. In this application scenario, the mobile NVR must provide wireless network so that the IP cameras in the trains can function effectively. Besides, passengers today demand Wi-Fi access services when they are onboard.

For deployment on rolling stock for railway applications, the required mobile NVR system must meet the specified parameters, including temperature, humidity, shock and vibrations by EN50155 and EN50121 standards.

Extreme ambient temperature may be encountered in railway operations, and thus the required mobile NVR system must be able to operate in wide temperature ranges, ideally from -40 to 70°C.

In harsh environments like railways, M12 connectors are necessary for the NVR system as external impacts may occur when rolling stocks are in operation.

GPS tracking is a must for the operating trains for the control center to keep track of rolling stocks. GLONASS is also supported in certain countries. On the other hand, the required NVR system shall be built in with G-Sensor to detect changes in motions. 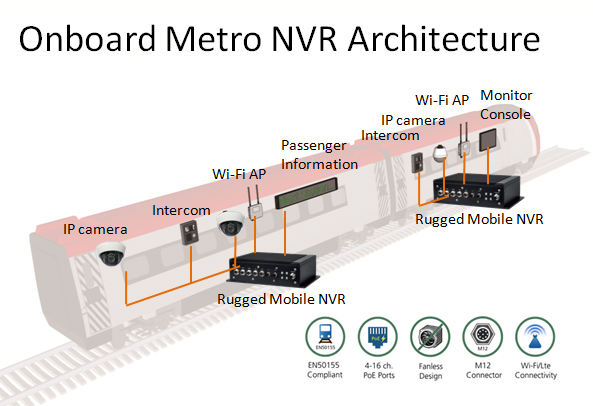 Lanner’s rail computers are highly capable of train automation and mobile NVR applications by offering rich I/O connectivity and modular design. The rolling stock series are customizable and designed to be rugged in railway applications with wide operating temperature range (-40 to 70°C) and EN50155 compliance. Besides, all Lanner’s rail computers are built in open architecture for high flexibility and wide interoperability.